On August 1st 2012, three friends got together to talk about how they could support the Nahorny’s, whose 4-year-old son, Sammy, had just been diagnosed with cancer. That night “Sammy’s Superheroes” was born. They created t-shirts and asked local Nebraska schools to support Childhood Cancer Awareness Month that September. Players, coaches, students and fans bought and wore Sammy’s Superheroes t-shirts, with all funds to be donated to childhood cancer research. No one could have guessed how much money would be raised or how a community would come together to support a sweet boy and his family. Before they knew it, Sammy’s Superheroes had raised nearly $40,000 for childhood cancer research!

It’s funny how timing works, and looking back, it certainly seems that Sammy’s Superheroes Foundation was “meant to be.” In early December 2012, as this group of family and friends were researching organizations to donate these funds to; the Nahorny family was dealt a huge blow. Not only did little Sammy have cancer, now he wasn’t responding to the chemotherapy treatments he had been receiving. This small group of family and friends delved into new territory, researching new hospitals, clinical trials, drugs, doctors… What they found was shocking. While childhood cancer is the #1 cause of death by disease in children, only 4% of federal cancer research is allocated to children. At that time, only one new drug had been approved for pediatric cancer in 20 years. Chris and Erin Nahorny, Sammy’s parents, describe this time as even scarier than when Sammy was first diagnosed.

A family friend, who is also an attorney, brought forward the idea of taking Sammy’s Superheroes to the next level. If they  were to become a 501c3 non-profit organization, they could donate funds to the researchers and hospitals they felt were doing the most innovative research aimed at finding cures for childhood cancer. Seeing a huge gap in available research and funding, this was an easy decision. Chris and Erin Nahorny, along with Erin’s three close friends, Kim Brandenburg, Mary Sueper and Amy Williams, became Sammy’s Superheroes founding Board of Directors.

In early 2013, Sammy’s Superheroes Foundation officially became a non-profit organization, and has since donated to research projects across the country. One of the most important things the group determined was that it’s mission would be to raise awareness for ALL types of childhood cancer and to fund research that would affect the most possible children affected by this terrible disease. 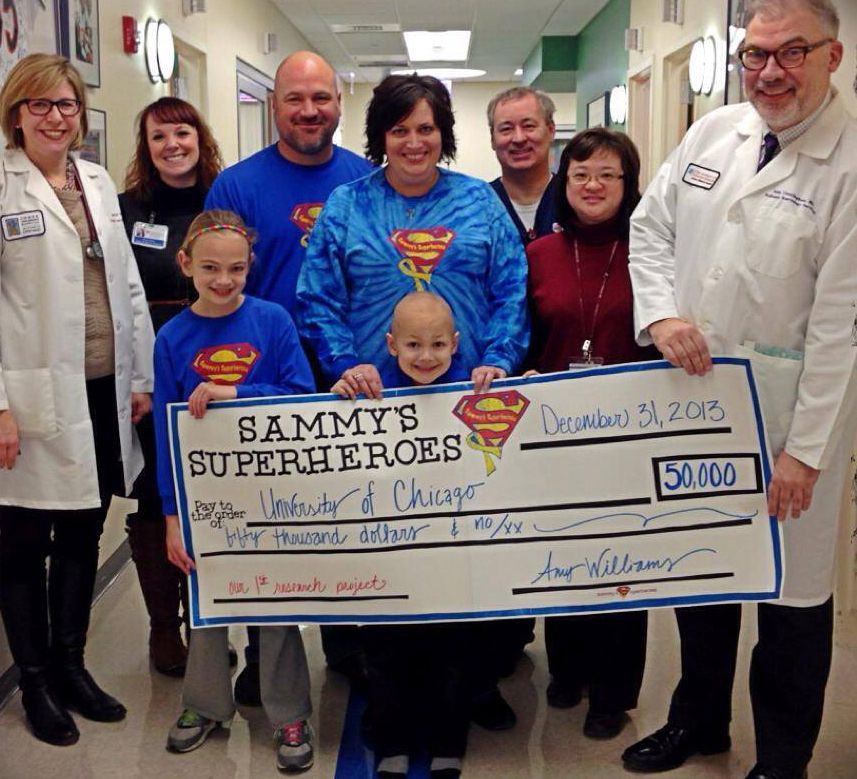 The very first research grant from the Sammy's Superheroes Foundation to the University of Chicago to support life-saving research efforts for childhood cancer.

The mission of Sammy's Superheroes Foundation is to raise awareness and fund life-saving research for all types of childhood cancer.